Swimming: The beach at the north end of Pearce Lake also has a first aid station during the summer months.

This place sure lives up to its name. You can have a chill time at Breakheart, but not on our watch. Prepare to work hard for your chicken dinner here with lots of technical climbing and bombing tight descents, but take a quick break and enjoy the seclusion and sanctity of the tall pine forest. 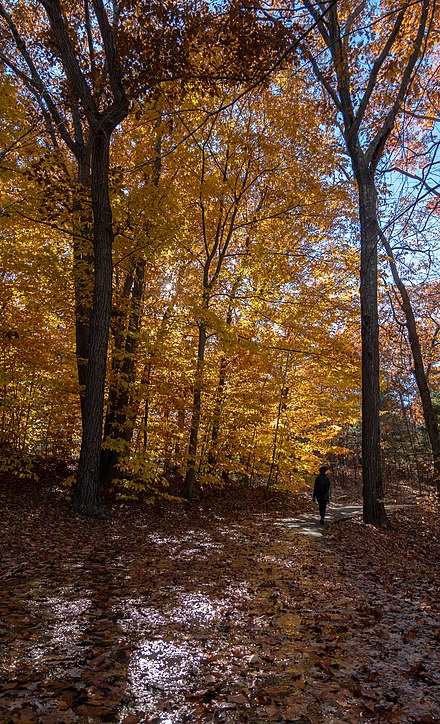 how did this land come to be?

Archaeological evidence shows that hunting, camping, and fishing took place along the Saugus River as far back as the Paleo-Indians and continuing through the Archaic and Woodland periods.

In 1706, the land (known as the Six-Hundred Acres) was divided among the male settlers. During the 18th and 19th centuries, the land remained largely unchanged. Most of the land was passed down through the same families. Most landowners resided off of the property and used the land for firewood, if at all.

In 1814, a fieldstone milldam was constructed downstream from the Gifford site to provide power for the Linen and Duck Manufactory Company of Boston. The mill closed after the War of 1812 due to a decline in the demand for sailcloth; however, the dam still exists.

In 1891, Benjamin Newhall Johnson, Micajah Clough, and John Bartlett of Lynn began purchasing land in the Six-Hundred Acres for use as a hunting retreat. They created Upper Pond (today's Silver Lake) and Lower Pond (today's Pearce Lake), stocked them with fish, and named their property Breakheart Hill Forest. Johnson purchased a log cabin in Maine, numbered all of its parts, and brought it down to Breakheart Hill, where it was rebuilt on the shore of Lower Pond. On June 12, 1891 the retreat was officially opened. In the early 1900s, the partners increased the size of the property.

The Six-Hundred Acres was also home to Breakheart Hill Farm, an 18-acre farm. It was first owned by the Hitchings family, who sold it to Thomas Houghton for $375 in 1830. Four years later, it was sold to Artemas Edmands for $400. In 1892, Edmands' grandson sold it to the Breakheart Hill Forestry, run by Johnson and his associates, for $1.

After purchasing the land, Johnson hired George Parrott to farm the land and keep out trespassers. In 1897, Parrott was succeeded by George E. Bailey. In May 1900, Bailey hired John C. Best to assist him on the property. On October 8, 1900, after a dispute, Best shot and killed Bailey. He then dismembered Bailey's body, placed the pieces in burlap bags, drove Bailey's carriage down to Floating Bridge Pond in Lynn, and dumped the bags in the pond. After a sensational trial, Best was found guilty and executed in the electric chair at Charlestown State Prison.

Bailey was succeeded as caretaker of Breakheart Hill by Henry Cole. On April 12, 1901, Cole left home and was never seen again. He and his wife had an argument before he left and she believed that he had not returned because he had tired of his family situation.

After Cole's disappearance, George Parker took over as caretaker and remained on the farm until his death in 1923.

In 1934, the executors for Johnson and Clough sold the Breakheart Hill Forest to the Metropolitan District Commission for $40,000. The MDC then turned the land over to the Civilian Conservation Corps. Over the course of six years, the CCC built roads and trails, planted trees, and restored the dams at Upper Pond and Lower Pond. The CCC's efforts resulted in the return of wildlife that had become rare in Breakheart, including beavers, fishers, coyotes, blue herons, and owls. Breakheart was opened to the public in 1936.